According to a recent survey conducted by the US Bureau of Labor Statistics, the mean annual pay of a certified nursing assistant in the state of North Carolina was $22,860 and per hour salary was $10.99 in May 2013. NC employed 50,990 nurse aides in the same year and employment per 1000 jobs was 12.92. The figures in indeed.com indicate that the average salary of a CNA was $23,000 as of Jan 2015. It was 5% lower than the average income for job postings throughout the nation. Nurse aides selected at entry level receive a decent starting pay.

The annual salary of a CNA based on different percentile brackets in North Carolina is shown in the table: A certified nursing assistant performs duties according to their respective designation. The information on indeed.com shows that CNA Hospice made more money, i.e. $30,000 as compared to other job titles of the state. The lowest paid professionals were Correctional Prison Facility CNA who got $14,000. 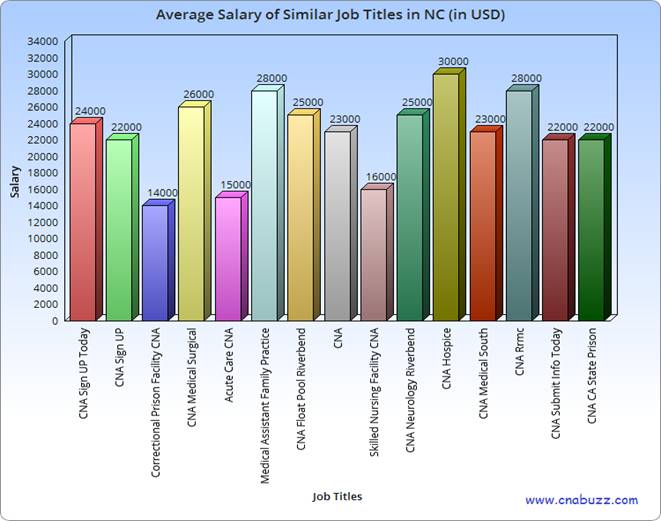 The various benefits offered to the nursing assistants provide them financial security.

The job opportunities of certified nursing assistants will rise by 21% in the near future, which will create 312,200 new positions by the year 2022. The only hindrance that might limit this growth is the dependence of nursing homes on the government funding. Nonetheless, shifts in federal, state funding and patient preferences may result into improved chances for CNAs employed in community rehabilitation services.

Question 1 – What average hourly rate a CNA can expect in the state?

Question 2 – Which is the highest paying city in the state and what maximum salary can we expect there?